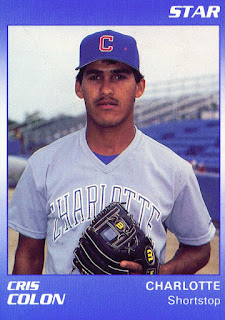 Another loss last night. Time for a trip down to the farm.

Cristobal Colon, shown here on card 3 of the 1990 Star Charlotte Rangers set, was signed by the Rangers in October of 1986. Coming from Venezuela it was hoped that he would be a shortstop in the vein of other great Venezuelans. Being the nephew of former White Sox star Chico Carrasquel helped to add to the expectations.

I have to admit that I am not really sure why Cris is included in this team set. He wouldn't play for Charlotte at all in 1990. Instead he split the season between Single A Gastonia and Double A Tulsa.

Colon earned the promotion from Single to Double A after his bat finally seemed to come around. A .321 batting average in 149 plate appearances got him the ticket.

Unfortunately Cris couldn't quite keep the average going at Double A. In 245 plate appearances his batting average slid to .244 and his on-base percentage to .260. Ominously, his walk total rose by just one while he struck out an additional 13 times. He was able to keep his power numbers steady for the most part but with three less triples his slugging percentage also dropped.

That kind of performance wasn't the way to get the call from Arlington. In fact, it wasn't even the way to stick at Double A. To start off the 1991 season Colon would find himself assigned to A+ ball. The year after this card was issued Cris Colon officially appeared on the Charlotte Rangers roster.
Posted by Spiff at 7:55 PM