Man of many talents. 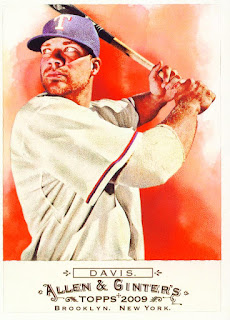 Listening to last night's game and one thing really stood out. The Rangers were fortunate not to have to face Oriole's reliever Chris Davis, shown here on card 188 of the 2009 Allen and Ginter set.

Davis came on in the bottom of the 16th inning against the Red Sox on Sunday night. He tossed two scoreless frames to pick up the win when the game finally ended after the 17th inning. Rangers fans knew Chris could field and hit but probably had no idea he could pitch as well. Apparently Texas gave up more than they thought in the trade that sent Davis to Baltimore.

Judging by the seven run ninth for the Rangers last night, the O's would have been wise to have broken out their secret weapon again.
Posted by Spiff at 1:39 PM