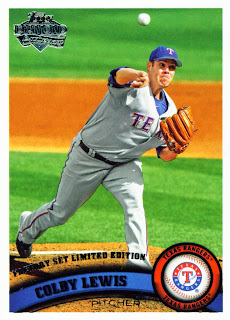 Well, Texas split the double header yesterday in Baltimore. The Rangers and Orioles ended up playing the twin bill to makeup for the rain out on Wednesday. I got to listen to the Rangers take game two. I missed game one due to work.

Apparently I missed a very interesting game in spite of the Rangers losing. Colby Lewis, shown here on 2011 Topps 60th Anniversary Factory Set card number 634, made the start for Texas. By all accounts he felt good while he was warming up.

Seven innings later Lewis said he still felt fine. In fact he felt like he hadn't thrown much at all. He had though. Enough to strike out 12 O's. Very impressive. With a strikeout total like that one would expect a win. Colby lost though. That was due to the five home runs he gave up. With a home run total like that one would expect that he was being hammered all over the park. Nope. Lewis only gave up five hits in seven innings. All five were long balls though.

12 strikeouts and only five hits over seven innings for a 6-5 loss? Even Colby didn't know what to say about that. He told MLB.com, "It was just a weird game. I don't know how to justify that game." That about sums it all up I think.
Posted by Spiff at 7:04 PM