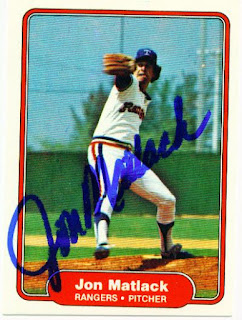 Well, the voting is open for the Texas Rangers 40th Anniversary All-Time Team. All you have to do is go here and you can vote from a list of selected players for each position. The position players were placed on the ballot due to being among the team's all-time leaders in games played. Pitchers were selected by wins, games started, appearances, and saves.

Here is the way I voted:
C - Ivan Rodriguez. Almost pulled the trigger for Jim Sundberg. In fact, Sunny has done more for the franchise than Pudge if you count his front-office work.
1B - Will Clark. Started winning with Will. Raffy was great but The Thrill helped bring postseason ball to Arlington.
2B - Ian Kinsler. Bump Wills speed, Julio Franco's offense, and Mark McLemore's glove. Kins gets it hands down.
SS - Michael Young. Michael was only listed here and at second. Toby Harrah should have probably beat him out but that's the stiffest competition he had.
3B - Buddy Bell. Steve Buechele's glove, Hank Blalock and Dean Palmer's bats. Almost went with Harrah here in order to get him on the team but Buddy wins out.
OF - Rusty Greer. Simply a company man and all-out player.
OF - Al Oliver. Great bat.
OF - Jeff Burroughs. First MVP award in team history.
DH - Juan Gonzalez. Power. RBI's. Simply decimated opposing pitching at his peak.
SP - Jon Matlack. Kind of a homer vote, kind of not. Probably about the best lefty the Rangers have ever started on a regular basis.
SP - Fergie Jenkins. 1974. Enough said.
RP - Danny Darwin. Starting in 1978 and running through 1984 Danny was a stable influence on a pitching staff in decline.
RP - Neftali Feliz. Rookie record for saves. I know he melted down during the World Series last year but he filled about any role in the pen the club had for him for the past couple of years.

So there you have it. I wasn't real thrilled that there was no chance to vote for backup players and no chance to write in. Toby Harrah and Jim Sundberg in particular need to be on the team. Also, why just two starting pitchers and two relievers? I can't think of any team that uses that small of a pitching staff. I also left off Alex Rodriguez and Mark Teixeira on purpose even though both were on the ballot. The way they left the team did as much or more damage than what they contributed on the field during their stay.

Any else care to share your vote and/or thoughts on the process and ballot?
Posted by Spiff at 5:03 PM