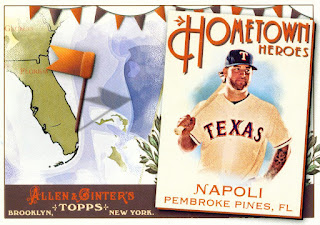 So the Rangers have signed Roy Oswalt to a one-year deal. I guess that's good. Could be he does real well and gives them a solid spot in the rotation. Could be his already creaky back goes down after a start or two and all Texas gets is a few spot starts. Either way it's only for one year. Hopefully Nolan Ryan's judgement of players holds up on this one.

The man Roy Oswalt is looking to replace in the rotation takes the hill tonight against the Mariners. Scott Feldman is looking to extend the Rangers current win streak to five games. If he gets the help that Matt Harrison did last night he should be able to do it.

Matt got a great defensive play from Nelson Cruz, Ian Kinsler, and Mike Napoli in the eighth inning. After Craig Gentry dove for and missed a drive into center it looked as though the Mariners were going to pick up two runs on an inside the park home run. However, Cruz backed up the play and fired the ball into Kinsler. Ian relayed it to Napoli, shown here on his 2011 Allen and Ginter Hometown Heroes card, number HH92. Nap blocked the plate and tagged out Seattle's Brendan Ryan.

If that play wasn't enough, Napoli hammered a three run home run in the sixth inning to put the Rangers ahead for good

Of course Matt Harrison maximized on the help by going eight innings and allowing just two runs on seven hits. He also struck out five while walking nobody. That kind of pitching keeps the team in the game so that hitting like Napoli's and defense like Cruz's matters. Final score: 4-2 Texas.
Posted by Spiff at 6:14 PM

Rangers fans: Be prepared for less than full effort from Oswalt.

Last season when he left the team to return home following huirricane/tornado damage, he took an excessive amount of time off (so that he could personally operate a backhoe), then ended up aggfravating his back, which was previously injured. This caused him to miss more time.

With the money he earns, you'd think he could PAY SOMEONE to do the heavy lifting, thereby accomplishing the following:

1. Save himself from further injury
2. Spend some quality time with his family before returning to the team (sooner)
3. Provide a job for someone in his hometown who (no doubt) was less well-off economically than Oswalt.
4. Minimize the time he was lost to his team (you know, the organization providing his BIG paychecks).