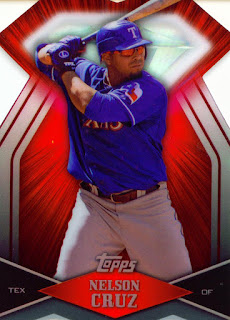 With the series tied at one game apiece, Texas sent Neftali Feliz to the hill last night against the Angels in Arlington. Feliz lasted six innings and gave up two earned runs while striking out five Halos. Not a bad start but several pitchers have found out in the past that a better one is needed against Angels ace Jered Weaver.

Not the case last night though. The Rangers managed to hang eight earned runs on Weaver before he left after 3.1 innings. That was enough to give Feliz the win and hang a rare loss on Jered. Very nice to see the win coming against the division rivals' ace.

Amazingly, Josh Hamilton didn't hit a home run during the game. In fact, the Rangers hit just one long ball as compared to the Angels three. The one Texas homer was a good one though. Nelson Cruz, shown here on card DDC-101 from the 2012 Topps Diamond Die Cut set, hit it in the third inning off Weaver. At the time there were three runners on. Nellie's grand slam made up a major part of the Rangers five run third and helped put them back on top after the Angels briefly led the game 2-1.

The Texas bats kept rolling even after Cruz's blast. Even though reliever Mark Lowe struggled and gave up three runs in his two thirds of an inning pitched, the Rangers managed to stay on top. Final score: 13-6 Texas.
Posted by Spiff at 12:16 PM

It was really nice to see them tag Weaver finally. It was distressing to see them let Bruce Chen look like an All-Star last night.